The Nhimbe for Progress staff families are incredibly grateful for the food assistance they have been receiving since November. We were able to purchase one ton of maize, and use it for both the staff and the preschool, saving quite a bit by buying in bulk. We got them the help they needed – when they needed it.

Now, although they had a great looking harvest coming, the ground was sun baked by intense heat and the March’s expected green mealies, (more like our corn on the cob), are not very significant, having been damaged by the weather. That means that there is less food coming for the rest of the year, and we are all doubly grateful for the assistance now, relieving the angst about the situation!

Here is a photo of just one of the happy staff members – Shylet Mubvumbi, our Nhimbe building cleaner and cook. She has just been given her 50 kgs of maize, enough for one month. Most staff members have 7 to 8 people to feed, due to the extended family of grandparents, parents, cousins, siblings and their, children, etc. The maize is a game changer for all concerned. More photos are on their way so we can share with those of you who donated towards their sustenance. 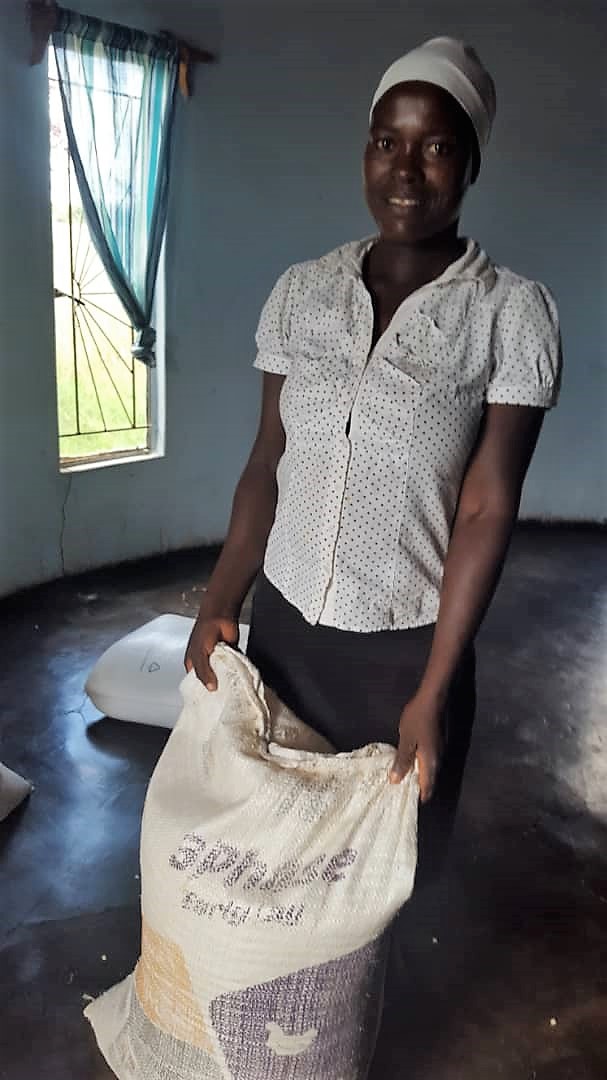 We’ve been sharing the story about the MMC marimba hut for many moons, and we can now say that several hurdles along the way have been resolved.  Gratefully, we are back into the swing of things after several stops and starts due to Covid lock downs, and challenges with the windows.  The builders did everything possible to keep the process going, one brick at a time, while dealing with the various issues.

All windows in Zimbabwe have “burglar bars” on them.  The first time I saw that arriving in Harare, I thought I was in a really scary place, but apparently it is one of the reasons that crime is fairly low. That, and the Shona are not an aggressive sort…desperate sometimes, yes, but not a violent people. 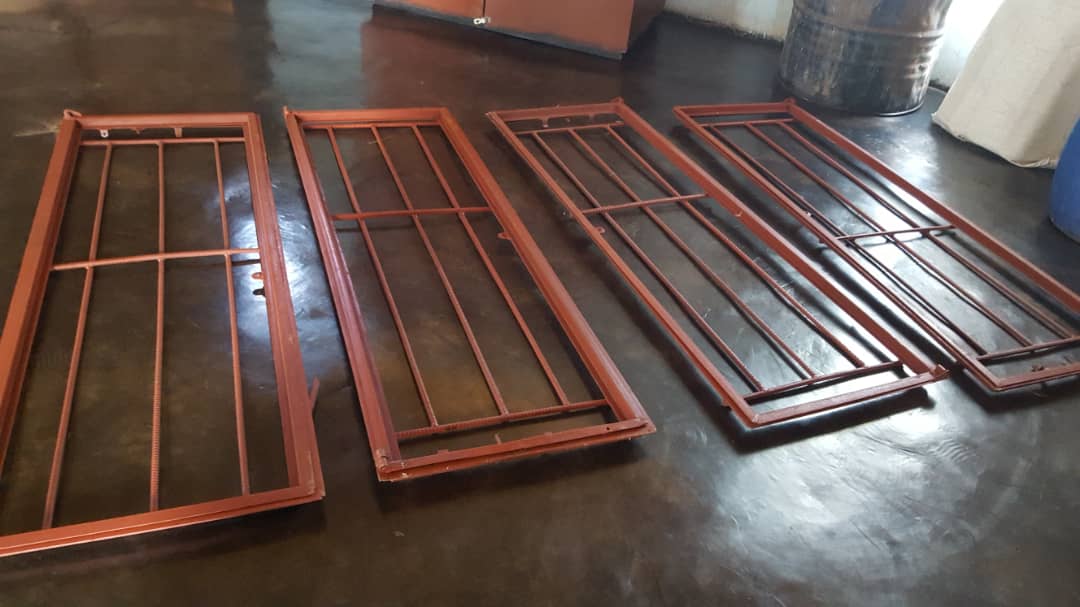 These new windows were supposed to be like the Nhimbe preschool window bars, where the bars are used to make sun’s rays sweetly shining across the window but, amidst the other difficulties, that wasn’t a possibility.  Among other things, the fellow that made them for us was delayed by a lack of electricity that is required for welding metal, and then they were not to specs, and he needed to redo.  Now they are installed! Yay!  It looks like Shylet has done and incredible job on the multi-purpose room floor – that is quite a shine. 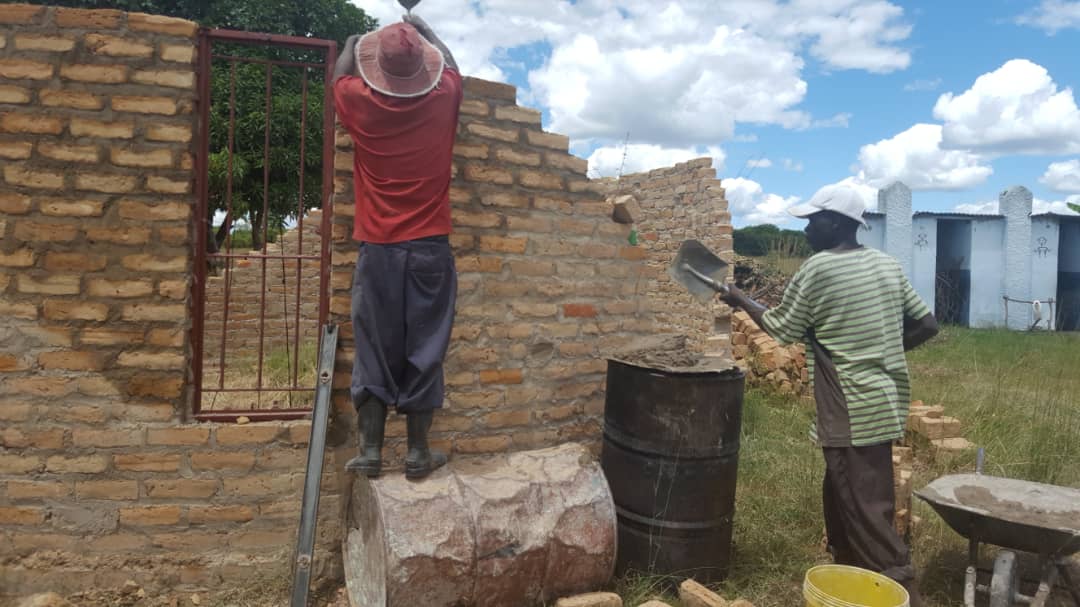 Watching these fellows build is always interesting.  The walls go up in a circle, which in itself seems quite complicated.  Wire is used to hold windows and doors in place.  Once the walls are established, the plastering can go over the bricks to protect and seal out the weather.  You can see by the color variation which bricks were just laid.

I love the ladder technique…building in a very traditionally Zimbabwean resourceful way.  They work well together giving teamwork a new meaning.  The fellow on the ground is handling all of the movement around the building, making sure the brick layer can just keep on.  Behind the go‘fer guy below, you see a bit of firewood for the preschool cooking, and the rest of the bricks.  The bricks are all made within our villages and more people have begun to produce them to generate some income.

Just like the rest of the world, the Russian invasion of the Ukraine is shaking up the economy and the countenance of Zimbabwe.  Muda comments that he and his generation haven’t really seen effects of world affairs so directly on their economy before this. Mostly inflation has come from internal processes. Now he sees the connection to the world at large.

Two days ago, the petrol prices had just jumped with another increase on its way.  Once petrol increases, so does everything.  We have taken what funds are available, and have purchased two terms of food for the preschool right away, while we wait and watch the prices on everything rise.  Muda says everyone begins scrambling to stock up with what funds they have. Also, petrol starts showing up on the parallel market, where its illegal to buy, but it is a normal part of the economic reality.

Thank you again for listening in, and tuning your dial to our frequency.  The work is ongoing and the various obstacles never ending.  But the Zimbabwean people are tenacious and resilient…most people I know would fade in the face of these kinds of concerns – continued lack of food, an unstable economy for decades, the fabric of their society’s traditions being threatened, and many of the best doctors and teachers having left to find work elsewhere, to name a few.

We all appreciate everything that you have done and continue to do, to support the upliftment of the children and the community at large.  You are amazing!

p.s. We have sent tax receipts out in 2021, pretty much as your donations arrived.  If it ended up in spam or otherwise in the inbox abyss, please feel free to reach out and we will resend!

Signup with iGive to help us through your purchases.